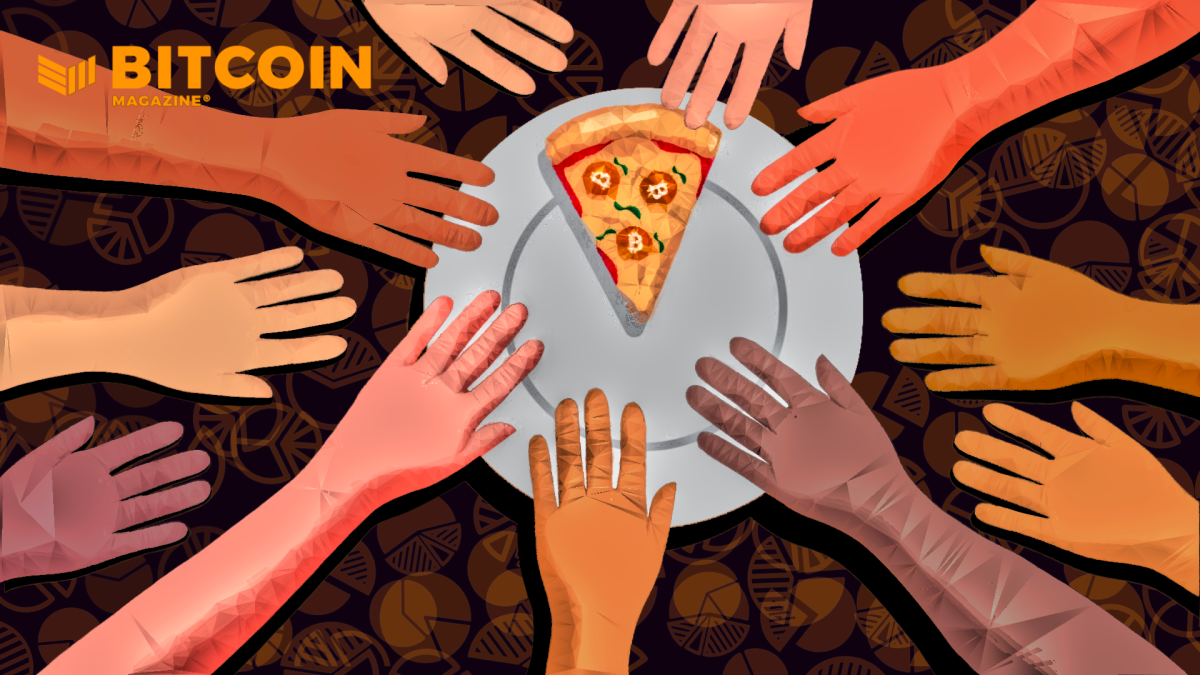 Pizza Day is a day of regret.

We all know the story. Laszlo Hanyecz buys two Papa John’s pizzas and some lucky guy got 10,000 BTC on this day 12 years ago. The story is like that of Peter Minuit buying Manhattan Island for $24. We can hardly believe that such a thing was possible given its value today.

The story has a lot of interesting angles. It was the first real-world good or service purchased with bitcoin. It established bitcoin’s price, since the two pizzas cost about $41, one BTC was about $0.0041. There’s also Laszlo, a guy whose innovation was mining bitcoin using GPUs (graphics processing units). He acted like a drunken sailor spending 100,000 BTC on pizzas, as he did the same deal several more times that month. He’s the Santa Claus in our story, giving away lots of goodies.

The part that everyone fantasizes about is being that guy that bought the 10,000 BTC for $41. We don’t fantasize about being Laszlo because we aren’t GPU programming experts. We can, however, imagine being the guy on the bitcointalk forums offering to buy bitcoin for a couple of pizzas.

Pizza Day brings out that daydream of being a bitcoin billionaire from having made a single brilliant trade. We all hate the actual guy that made this trade because we want to be him. We see the guy as lucky, as having won the lottery and we are envious.

This fantasy is borne of a fiat mentality. This hierarchy of values comes from fiat money. The desire is to be lucky instead of good. We would rather do no work and make money rather than provide goods and services and get paid.

It’s telling that the regret is about missed-out luck rather than missed-out innovation. It’s easier in a fiat world to dream about being the guy that sold pizza than being the guy who had the foresight to mine with GPUs. This is fiat accomplishment, getting lucky with money, versus real accomplishment which is earning the money by providing goods and services to the market. Most people would rather get lucky being associated with an innovator than be the innovator themselves.

We all have our bitcoin regret stories. I remember when I learned about bitcoin in February 2011. I tried to find a way to buy bitcoin using a credit card but couldn’t find anything. I tried mining on Amazon Web Services and didn’t find any blocks solo-mining for two days. I started the process to move dollars into Mt. Gox and I decided it was too much of a hassle to set up when the price dropped from $1 to $0.90. I could have bought bitcoin at $0.90, but I didn’t. It’s one of the biggest regrets of my life.

Bitcoin regret stories are like bad-beat stories in poker. Everyone has them and they are fantasies about different, luckier outcomes. They are useless stories because the feelings of regret assume virtues that aren’t common.

The Difficulty Of Holding

In these regret stories, we miss something. What if we had bought it when we heard about it? How would we have handled the subsequent hardship? Would we have had the diamond hands to hold through the 85% drawdowns in 2011, 2013, 2014 and 2018?

If you fantasize about the Pizza Day story, do you ever think about the difficulty of holding in 2011, 2013, 2014 and 2018? There’s a tendency to assume that we’d have the conviction that we have now like a time traveler would. I’ve gone through it, and let me tell you, most people didn’t have conviction and they sold. Many people think they would have held strong through all the difficult times, but that goes against all evidence, just like the original O.J. Simpson verdict.

Holding 10,000 BTC wasn’t uncommon back in 2010. There were a lot of people that had a lot of bitcoin, but where are they now? Most of them sold when bitcoin price doubled or tripled and never looked back. They saw bitcoin as a plaything and didn’t understand the revolutionary nature of it. So they sold it to buy a new computer, a new bike or a new car.

Had you sold Laszlo two pizzas for 10,000 BTC you also would have sold. To think otherwise is hubris. Most people back then didn’t understand what bitcoin was and there were no educational resources explaining why you should hold. We now have an embarrassment of riches when it comes to understanding bitcoin. In 2022, it’s much easier to understand that bitcoin is a better money than anything that came before. Back in 2010, it was much, much harder. Do you still think you would have had diamond hands?

To hold bitcoin is to have deep conviction about what it is. There are necessary virtues to be a holder for the long term. Holders understand the fundamental value and can thus withstand the 85% drawdowns that come on a regular basis. Only the truly extraordinary managed to hold from 2010 and you likely would not have been one of those people.

But say you beat the odds and had conviction. You held through 2011 and even the first bubble in 2013. Would you have had the foresight to withdraw to your own wallet before Mt. Gox exploded in 2013? Or if you used another exchange before then, would you have gotten out before they exit-scammed? We say “not your keys, not your coins” now, but back then, this was not common practice. A lot of people had to be screwed over for that lesson to have become a meme. Even with conviction, there’s a good chance you would have been one of the many people who were screwed.

There were also other dangers, like the advent of altcoins starting in 2011. How many bitcoin would you have lost in those? There were also all manner of scams, including Pirate40 and others who promised a large return by running Ponzi scams. Would you have avoided those? Looking back on those dangers, it’s a miracle that people made it past those years with any bitcoin at all. Many OGs are like Vietnam veterans, reflecting on the times when they were lucky to escape the many dangers.

Conviction Is Hard To Develop

Deep conviction does not come for free, and for early people it was especially hard to earn. Remember, everyone was calling Bitcoin a scam back then. Even now, it takes years of study and balls of steel to develop that conviction. Back then, having Bitcoin conviction was as rare as a physically-fit government health official.

Going against conventional wisdom and following your convictions requires a great deal of courage, which a lot of people don’t have. Think about what happened during COVID-19. How many people had conviction to say something against the mainstream narrative in March 2020? That’s the level of conviction you had to have to hold bitcoin through those early years.

In 2022, we have a lot of resources that help us to save in bitcoin. We have podcasts, books and videos to help us navigate this space and not only develop the conviction, but the best practices that we need to hold. The early years were a minefield of traps to lose your bitcoin. It’s much easier these days to avoid those traps, but back then, there weren’t OGs that could warn you to avoid them. The resources that exist now and the Bitcoin memes we have today are not propaganda. They are the fruit of bitter experience.

If you study the early people from the Bitcoin space, there’s a disturbing pattern. Pretty much every non-technical bitcoin advocate pre-2013 is now shilling an altcoin. Why are so many early people bitcoin-deranged?

We can find some answers in the fiat world of lottery winners. Years after winning, many lottery winners end up worse than before they won the lottery. They aren’t equipped to handle the windfall and many of them end up in more debt with broken relationships and some even commit suicide. That has unfortunately been the fate of many early Bitcoin adopters. At some point in the last decade, they either were scammed or scammed themselves. The result is that they became enemies of Bitcoin because they never had that conviction or virtue.

So to ruin your daydream even more, there’s a good chance you would be an altcoin scammer had you gotten in early. These are serial scammers who have no qualms about lying, cheating or stealing their way to wealth. They live in a rent-seeking hell of broken dreams. That’s not a good fate and something I wouldn’t wish on my worst enemy.

For many people, Pizza Day is a time-traveling fantasy where they can daydream about being rich. Such thinking is what leads people to altcoinery because the mentality comes from fiat money. For them, Pizza Day is really a fantasy about getting lucky and not having to do work, yet making lots of money. In other words, it’s a rent-seeking desire writ large.

Fiat money has created a consumerist mentality which exacerbates the desire to rent-seek. The government takes advantage of this desire with lotteries, which are ways to profit from that desire. Altcoins are taking advantage of that same desire. Pizza Day unfortunately puts our minds back to that same mentality of wanting something for nothing, of the desire to be lucky rather than good.

Pizza Day should instead remind us that conviction is not easy to form. Conviction requires knowledge, wisdom and courage, which are virtues that need time, energy and effort to cultivate. Instead of being envious of the early adopters and fantasizing about being one of them, we should take the time to develop the conviction needed to be someone that can hold through all the difficult times. Because as we say in Bitcoin, it’s still early.

Ten Things You Bought Instead Of Bitcoin