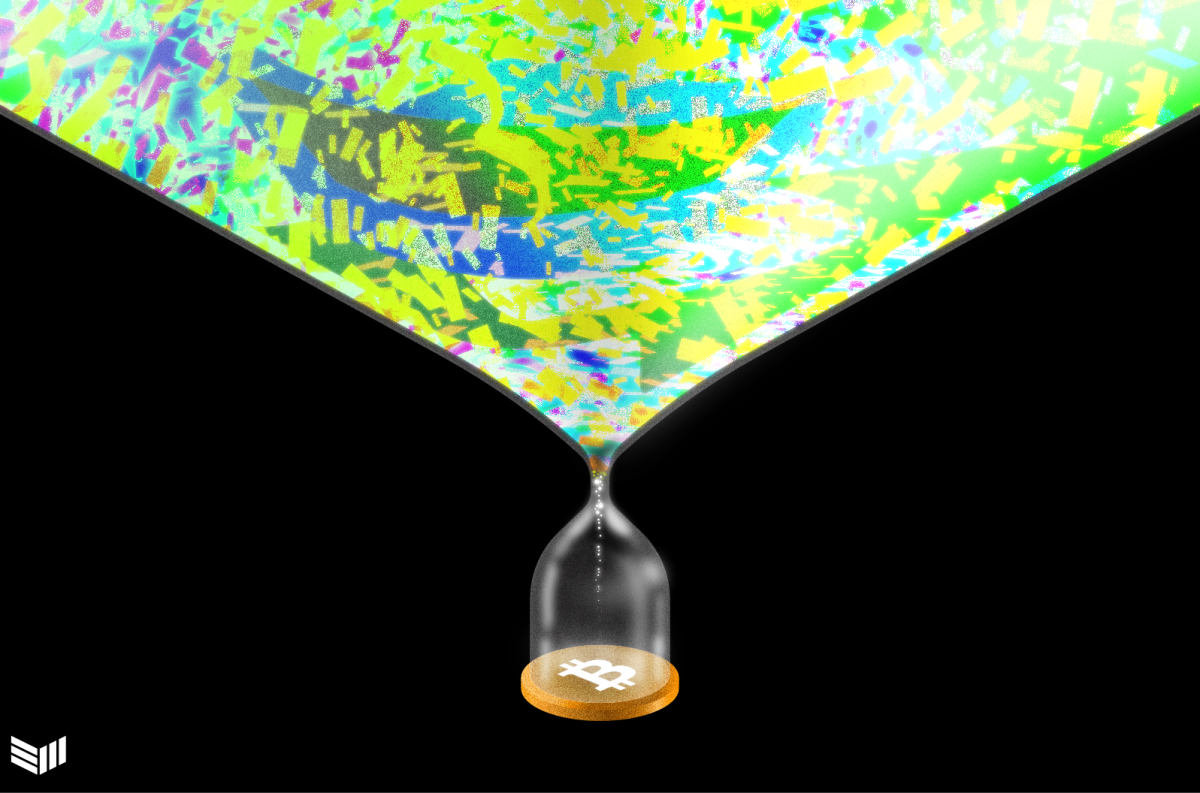 Rent seeking is the real virus.

The virus spreads from person-to-person through the central bank-backed fiat monetary system and grows like a cancer through regulation. Rent seekers think they are providing some value somewhere, but can’t identify how, because they aren’t providing any. They are able to extract a tax from various transactions, consuming resources without producing. They are a cancer ruining civilization, infecting governments, corporations and everything in between.

What’s making rent-seeking thrive? How do we rid ourselves of this plague?

The problem of rent seeking comes from incentives, and fiat money is what creates them. Fiat money is like consuming candy and sugary soft drinks. They incentivize the wrong bacteria to thrive in our mouths, creating cavities.

Similarly, fiat money creates the right conditions for rent-seeking jobs. There are many such jobs, like government-funded think-tank jobs, compliance personnel at various companies and of course, in banking.

There’s a lot to like about such jobs as they’re generally pretty easy as there’s little to no competition. They also pay well and there are no fickle customers to satisfy. The only people that need to be satisfied are the people in charge, and as long as you stay within their good graces, your job is secured.

Instead of satisfying some need in the market, rent seekers satisfy some authority, which generally means less real work. The economics of rent seeking are that there’s ultimately someone printing the money to help them. As long as the host survives, the cancerous rent-seeking class can continue to thrive.

The classic example of rent-seeking is government bureaucracy. Bureaucrats earn money through copious amounts of red tape, forcing companies and individuals to check meaningless boxes. There are two ways they get paid. First is direct taxation, through fees for approval and/or fines for noncompliance. Second is through monetary expansion, when the box checking does not pay for itself. In a sense, all box checking is a tax in that time and effort get wasted, but the regulations doubly damage industry by theft through money printing. Like cancer, not only does it interfere with helpful functions, it also consumes resources.

Rent-seeking is not limited to government bureaucracy, however. Compliance to government regulation is a huge cost for every big company. There are reporting requirements of all types and no industry is exempt because hiring and employment are so heavily regulated.

Human Resources departments are almost entirely focused around compliance in employee matters. The rules around how you must treat employees are so vast and difficult to navigate that a whole department is necessary. Yes, they do provide some value in arranging for candidate interviews, but most of their function does not add value to the business. Compliance costs are entirely unnecessary from a product perspective, but are very necessary from a satisfying-the-government perspective. The authorities become a consideration for companies through compliance which detract focus from the market, or customers. HR is a cancer that diverts resources which would otherwise make better goods and services.

These are implicit taxes which are paid by the companies, making their products more expensive. But more importantly, it makes starting such companies that much harder, which ultimately results in less competition, making products even more expensive. Large companies secretly don’t mind the compliance costs because it means they don’t have to innovate as much due to fewer competitors. This is the perverse attitude of thinking cancer may suck, but at least new cells won’t be replacing them.

Furthermore, all the compliance with government regulations results in some quid-pro-quo with government legislators. Companies which have shown loyalty are bailed out by the government when they get in trouble. After bailouts, the entire company becomes subsidized by fiat money, making their entire existence rent-seeking. They become an extension of the state in all but name and provide little value.

A startling number of companies are currently like this and produce goods and services at a loss. Through financial tricks, they are able to continue running and suck energy and resources out of the rest of the economy. They are zombie companies, the walking dead of the economy, who consume resources and contribute nothing.

Banking Is The Ultimate Rent-Seeking Job

Worse than government bureaucracy and bailed out companies is the entire banking sector. These are the money printers and they can essentially reward themselves the benefits of creating their own money — an implicit tax on everyone else.

They rent seek by creating loans which have no opportunity cost. Each loan dilutes the dollar during the duration of the loan. Every loan, from T-bills to credit card loans benefit banks at the expense of everyone else. Banks are ground zero of rent-seeking, the nuclear fallout which results in all the cancer.

Particularly damaging are the insane amounts of leverage executed through shadow banking, where significant amounts of money are created for the benefit of hedge funds and investment banks. Retail banking is a grenade compared to the nuclear warhead that shadow banking is. They create nothing useful for society and everything they do dilutes savings at an insane rate for dollar holders. What’s terrible for dollar holders is enormously profitable to the bankers.

This is why for the past 50 years, the best and the brightest from the best universities in the world have gone into investment banking. People go into investment banking, not because they have a passion for it or are particularly talented at this rather esoteric profession, but because it makes tons of money. This is doubly evil because not only are we deprived of innovation, but the best and the brightest become the worst cancer cells.

Particularly disturbing is the fact that we haven’t really pushed the frontiers of human conquest since 1969, when we landed a man on the moon. Indeed, the best and the brightest have explicitly not been working on pushing the frontier because they’d rather rent seek either in investment banking or elsewhere.

The few people that actually create goods or services generally retire to become VCs, which is itself a rent-seeking business. They tax investing in high-risk startups and nowadays are using post-modern Nietzchean investment tactics to create unicorns. They pump things because they can and steal from vulnerable and gullible retail investors. Rent seeking is too lucrative now to bother with the hard work of making something the market really wants.

Sadly, this has even affected what the market wants. Instead of striving to become better people, most people strive for more entertainment. They’d rather navel-gaze than create. They’d rather watch Netflix and doom-scroll than make something using their unique talents. The rent-seeking has penetrated so deeply that there’s no real desire to make a difference, or push the frontiers or do something meaningful. It’s meaningless turtles all the way down.

Which brings me to altcoins. Altcoiners are rent-seeking as much as bankers, which is to say that they create nothing of value. They take the worst of investment banking and venture capital combined with the worst of the navel-gazing meaninglessness to create a super-zombie. The result is a nihilistic destruction of value.

Altcoins are funded by venture capital, hyped on Nietzschean will-to-power and extract value from the many people who envy the cushy rent-seeking jobs of investment bankers. Unlike investment banking, however, getting into altcoins looks much easier and the promise of money without working is what tempts people to get in. Altcoins take advantage of the general desire to be a rent-seeker.

The people investing in these projects want nothing more than to make money without doing productive work. The fact that early adopters do exactly that is evidence for these investors that perhaps they, too, can be rent-seekers through some magical Keynesian fairy. The greed that drives altcoinery is the fuel driving their pumps.

Of course, reality has a way of destroying such projects, but they can run for a time. The people that get hurt are the poorest and most vulnerable, who are desperate enough to put their hard earned money towards that which they hope to create rent-seeking positions.

The alternative to this something-for-nothing mentality of rent-seeking is doing the hard work of creating goods and services for the market. Yet in a fiat-heavy world, this is increasingly difficult as value gets stolen from productive work through monetary debasement.

Bitcoin is the vehicle that allows people to protect the fruits of productive work from inflationary theft. Bitcoin resists rent-seeking which means Bitcoiners can finally get out of the rent-seeking mentality and focus instead on providing value to the market. This results in more people creating useful goods and services and building civilization. By protecting savings, Bitcoin incentivizes honest work.

Altcoins and fiat money destroy value, Bitcoin stores value for those that create it in an unconfiscatable, inflation-proof way. In other words, Bitcoin gives the advantage back to those who are being productive and creating value because there’s no central authority that can steal it. More creating and less rent-seeking ultimately builds civilization. Bitcoin is an antibody that destroys the cancer of rent-seeking.

The confusion around “crypto” has prevented Bitcoin adoption for the people that need it most. I find it tragic that many people in the poorest countries in the world have been scammed by altcoins. Many in developing countries simply refuse to put money into Bitcoin as a result of altcoin scams. Every new altcoin adds confusion to a marketplace that really needs clarity.

Unfortunately, VCs are no help as they are incentivized to pump the tokens they hold. Governments aren’t helpful either, since they want to protect their own fiat money and lump Bitcoin together with altcoins for that reason. We are fighting a propaganda war and we have way fewer resources than they do.

Yet there’s hope — because ultimately, the scoreboard over the long-term bears out the reality that Bitcoin is superior. Most altcoins get destroyed after a year or two and even the long-running ones do terribly against Bitcoin over a period of five years. It becomes obvious that only VCs and insiders make money while everyone else gets destroyed.

In the meantime, many in the developing world are trying their hardest to become crypto bros instead of productively building up their own communities. Bitcoin’s usage as an unconfiscatable, undebaseable savings vehicle should be their focus, but altcoins present rent-seeking in the same way investment banking diverts resources away from real innovation.

The exploitation of the people in the developing world is blood on the hands of every altcoiner.

Bitcoin Stories For 100 From Paxful

Blue Chip NFTs 101 – What Is The Proof Collective And Who’s Behind It?