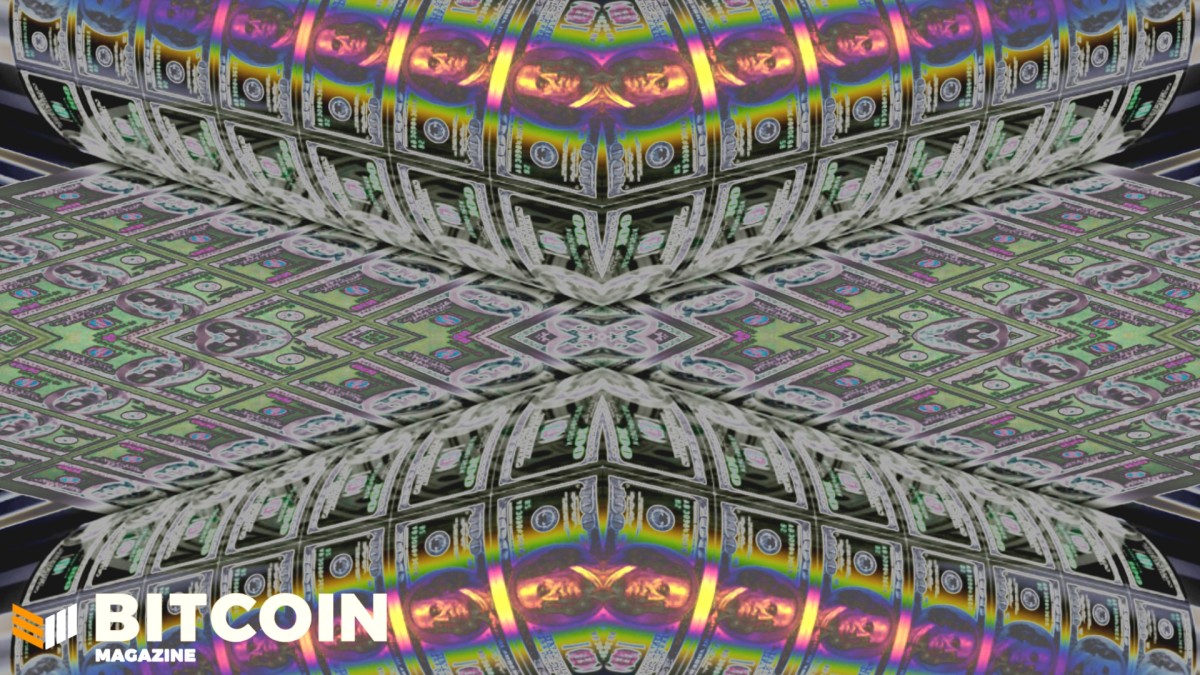 This is the second article in a series about lessons that can inform bitcoin’s replacement of the U.S. dollar. Read the first article in the series, on leaving the gold standard, here.

The Open Systems Interconnection (OSI) model gives seven layers of computation that allow a network effect to emerge. The network model used today is the TCP/IP model. When the two are compared, OSI is known for having stricter rules and providing delivery assurances as it transfers data. It is also known for being less reliable, as TCP/IP allows for greater levels of efficiency.

This is not a comparison of the two models. Rather, we will use OSI to stage a model for both fiat and bitcoin in order to understand the requirements needed to scale a network. We will use OSI because it allows us to explore each layer more in-depth and it most resembles the foundational building blocks of Bitcoin. It is within the construct of OSI that we will view the architecture of the current fiat system in order to understand how Bitcoin will achieve hyperbitcoinization.

An important note: these layers are not necessarily chronological, as previous layers may be used to expand on another.

Layer One: The Physical Layer

An overview of each layer can be found here, which is the source of the quotes in this article, unless otherwise noted.

“It defines the electrical and physical specifications of the data connection. It defines the relationship between a device and a physical transmission medium.”

The first layer of fiat architecture is the physical asset. Prior to the abandonment of sound money principles at the willful sacrifice of the gold standard, this could be understood as tangible gold. The base layer of any sound money is the actual asset itself.

Gold became a burdensome problem. Salability, or the ability to move the asset from one place to another with ease, was exceptionally difficult. Currency needed to be spent in the transmission of the currency itself. Shipping requirements with supply chains paired with storage issues were the surface of problems found in trying to make gold mobile. It just couldn’t work.

What would be the base layer of a fiat system, absent an asset to back it? Look no further than the definition of fiat. It is an order or decree of the government. The base layer, or layer one of a fiat system, is a centralized government capable of controlling the currency, the physical manifestation of fear backed by a monopoly of violence with a money printer hidden in their basement.

“The data link layer provides reliable transmission of data (frames) between adjacent nodes, built on top of a raw and unreliable bit transmission service provided by the physical layer.”

On a gold standard, this is easily represented by bank notes and electronic communication via messaging services that are stored on a central ledger — paper claims to the hard assets that are easily used as a medium of exchange. Our fiat standard currency begins here, since the physical asset is only a paper claim to nothing. In this case, the central node (Federal Reserve) keeps an electronic IOU on behalf of each participating node (other central banking entities). One of the largest examples of this is SWIFT.

“Behind most international money and security transfers is the Society for Worldwide Interbank Financial Telecommunications (SWIFT) system. SWIFT is a vast messaging network used by banks and other financial institutions to quickly, accurately, and securely send and receive information, such as money transfer instructions.”

This allows transactions to be made across space and time by removing the physical requirement of currency, and the banking nodes keep track of all transactions on their electronic, centralized ledger utilizing the SWIFT system. This is a communication system between the central nodes (banks) of each participating nation state.

“In short, the main function of this layer is Path determination and logical Addressing. This layer provides logical addresses to the packets received which in turn helps them to find their path.”

The second layer establishes communication between the central entities that allow IOUs to be tracked on electronic ledgers. The third layer seeks to allow this communication on an individual, or consumer level.

Path determination and addressing is when a system allows direct communication to each individual. In 1994, the Stanford Credit Union became the first financial institution to allow online banking to all of its users.

This system of online banking utilizes a routing number, which is the address associated with the centralized entity that enters each transaction into their database. The account number points to the exact account in which the funds will be transferred. This allows a direct path of communication between the central entity and its users.

Having not existed during the gold standard, we can only functionally see this within a fiat standard, though it’s not too difficult to imagine the same system with a fixed asset on a gold standard.

The transport layer seeks to allow ease of access and salability to the network. Attempting to address concerns of user experience, guarantee of service and quality of application, this layer is used to allow quality of transactions which are typically achieved with higher forms of centralization. This is what we refer to as “credit.”

Note: Yes, credit existed well before online banking. The United States established itself as a creditor in the aftermath of World War I as a global creditor, as it remained (somewhat) on a gold standard. As mentioned earlier, this is a discussion of current architecture and how it applies to future architecture. At a different time, these layers were achieved with obtuse tools and services, but we are concerned with the inner workings now, with the existence of actual networks.

Removing the need for collateral backed by assets, credit allows a creditor to profit from interest rates, and the borrower to benefit from debt to accomplish the intended action while still maintaining actual assets for other purposes. One could argue that the Bretton Woods Agreement establishing the USD as the global reserve currency, beholding every other nation to the dollar, was establishing a global transport layer on a system of IOU-based credit.

The guarantee of service is achieved by giving access to capital that a borrower may not have, the user experience is achieved by allowing time to the borrower to pay back the credited amount, and the quality of these transactions are achieved at the sacrifice of KYC data, interest rates, and central control of debt owed.

While most might think this refers to credit cards, it is actually used across the entire system. Those “pending” transactions you see in your bank account are being deducted based on an established credit that the bank assumes based on your balances. This is what leads to people getting overdraft charges, multiple charges clearing up at once and debiting the account to lower-than-expected levels. It’s the same thing with stocks or derivatives of any kind. Nothing settles instantly in a fiat system, and every transaction is based on credit of balances assumed until the transaction is finalized.

“Sessions can allow traffic to go in both directions at the same time, or in only one direction at a time. Token management may be used to prevent both sides from attempting the same operation at the same time. To manage these activities, the session layer provides tokens that can be exchanged.”

These “sessions” can be thought of as transmissions of data outside of the actual asset (gold, cash). Since the sessions are represented separately from the asset, tokens are typically associated with the transaction. In our fiat standard, this is the derivatives market. Stocks, bonds, ETFs, options, futures, real estate or other forms of financial instruments tend to come with their own token.

These tokens can be traded in both directions (bought or sold) and the tokens are managed by a central entity — that way you cannot buy more stock (or short it) than exists. Obviously, we found out this past year with the meme stocks that this wasn’t entirely accurate, as the centralized entities allowed far more tokens to be taken or sold than actually existed.

This layer is for a simple use case: making money make money — financial instruments that allow greater forms of leverage and volatility than their underlying asset (gold, cash) in order for those that understand these markets to make more money.

“The presentation layer formats the data to be presented to the application layer. It can be viewed as the translator for the network.”

The presentation layer is all about making the information look good, allowing for ease of use for applications. This is how the centralized entities process the information in order for it to become accessible to the average user. Programming and development come into play here and each design process can differ from the last, but there is only one goal. Make the information understandable for users of the application.

“This is the level that the user often interacts with. This is where data turns into websites, chat programs and so on.”

In this layer we find your online bank account user interface, the app that is used to access your stockbroker, the app you used to pay each utility bill or your car payment, and every other interface that you interact with as a consumer.

After all of that data, the systems, the tokens, communications and settlements, we are left with an application on our phone.

Within each of these layers are dozens of subsections that allow the current system to operate in the way that it does. We didn’t touch on fractional-reserve banking, the process of lending being the creation of money, or a myriad of other financial instruments that exist in the current system we have today. Why?

We don’t need to. The fiat system has only been in place for 50 years and it is a failed experiment. Prior to that, we had over a century with the gold standard in the U.S, and we used multiple metallics before that. The timeline can continuously be pushed back for ages. Why is this relevant? Because this system didn’t spring up overnight. It was the culmination of one failure after another in which those in power-maintained choices allowed their continued control over the system.

The idea that Bitcoin cannot be a reserve currency or a world-currency is grossly misleading when the only argument that is ever made against it is the architecture of the system. As if fiat systems, or even the gold standard was accomplished overnight.

Every system used over a long period of time had time to accomplish scale. In just twelve years, Bitcoin has managed to accomplish each of these layers. I hope you’ll join me in the next article where we discuss how Bitcoin achieves this, and the exciting room for growth we can find in a new system.

How Should Nations Hold Bitcoin

Why January Is Historic For Bitcoin