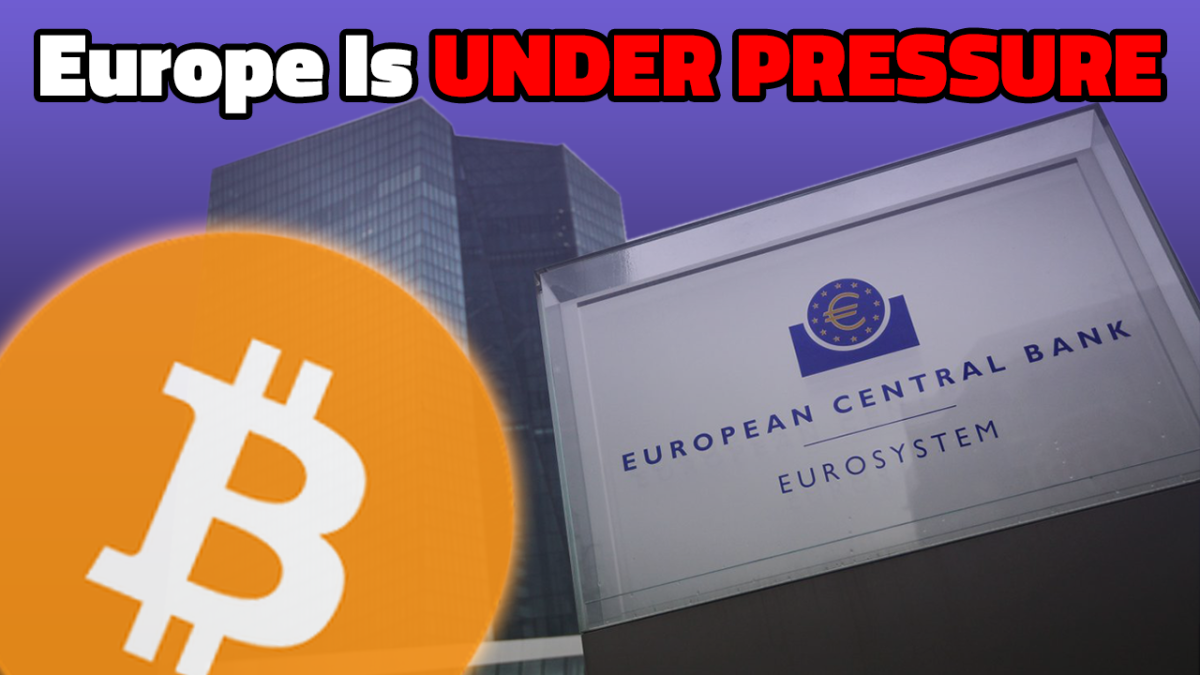 After a week off due to illness, we’re back with a new episode of Bitcoin Magazine’s “Fed Watch” podcast. In this one, Christian Keroles and I sat down to talk about the mysterious competitive world of central banking. Topics include Federal Reserve Chairman Jerome Powell’s reappointment and, funnily enough, what it means for the European Central Bank (ECB). There is an epic pivot in loyalties happening right now, as the Fed takes to heart its role as the U.S. central bank and distances itself from a responsibility to Europe.

We started the episode with our first trivia winner. I wanted people to answer the question: If central bank balance sheets matter, why are the ECB and Bank of Japan’s (BOJ) inflation rates lower and balance sheets higher relative to GDP than the U.S.’s? Mitch (@wittyusername30) had the best answer. Congratulations. To paraphrase: Central banks don’t print money, they swap inert reserves for useful collateral. This has a deflationary pressure on the economy.

Powell Gets Renominated As Chairman

Powell was renominated by President Biden as the Fed chairman, winning out over his primary competition, Lael Brainard. Several reasons were cited, like the fact that Powell’s path through Senate confirmation is much easier while Lael might meet with a split vote along partisan lines in a 50/50 Senate. Also, officials said Powell was being “rewarded” with another term for successfully shepherding the economy through the 2020 COVID-19 recession.

I view this appointment as having a deeper meaning:

One, We’ve talked at length on this show about Powell’s refusal to go along with the central bank digital currency (CBDC) hype. Other central banks are pushing hard for CBDCs, and Powell continuously splashes cold water on that idea. This symbolizes a break with globalist interests in favor of American banking interests.

Two, Powell has faced rising progressive opposition from Congress. Crazies, like Senator Elizabeth Warren, have attacked him because he is not dovish enough and not buying into the Fed’s role in climate policy. His reappointment is a repudiation of sorts against progressives and their toxic ESG initiatives.

Three, Lael is the more globalist-friendly choice. Powell symbolizes a break with globalists to a more America-centric policy.

Next, we jumped right into ECB news. This week, it released a new regulatory framework for electronic payments:

“The Eurosystem will use the new framework to oversee companies enabling or supporting the use of payment cards, credit transfers, direct debits, e-money transfers and digital payment tokens, including electronic wallets. The PISA framework will also cover crypto-asset-related services, such as the acceptance of crypto-assets by merchants within a card payment scheme and the option to send, receive or pay with crypto-assets via an electronic wallet.”

This stands in stark contrast to the U.S., where the White House and Treasury tried to carve out a bitcoin exception in the recent infrastructure bill, which ironically was thwarted by altcoiners wanting to protect scams that are decentralized in name only (DINO).

The ECB is scared that the euro will lose market share in the years to come, whittling away its “monetary sovereignty.” It wants to block competition from dollar stablecoins and bitcoin, while at the same time provide the market with a digital euro — a digital euro the market hasn’t seen fit to provide itself, by the way.

We went into depth on the many headwinds facing Europe right now. Of course, it has inflation, but it also is facing the Fed turning its back; supply chain disruptions and trade volumes shrinking; a rising case count of COVID-19, despite the authoritarians forcing shots under duress, new lockdowns and restrictions in many countries; and an escalating energy crisis that places Europe in the palm of Russia, right at the time Russia is massing troops on the border of Ukraine. It’s a perfect storm that is resulting in capital fleeing Europe for the dollar and hopefully for bitcoin.

Bitcoin And A Strong Dollar

This week, the dollar broke out decisively to new highs, signaling building stress in the global financial system. It looks like the collateral shortage that we’ve talked about for the last six to 12 months is turning rapidly into a dollar shortage.

Bitcoin is a neutral asset that is ready and willing to welcome capital fleeing Europe and China. It also offers a place for capital to flee to, that won’t unbalance debt elsewhere in the economy.

Investors know that a rising dollar hurts the global economy. Most debts are denominated in dollars, as the dollar rises it becomes much harder to service those debts. The world does better when the dollar is weakening, but is pulled into recession as the dollar strengthens. Bitcoin offers an alternative escape for that value, that might be able to short circuit the back and forth with the dollar.

For this thesis to be correct, we should see the dollar and bitcoin rising together, and that is exactly what we’ve seen this year; a very tight correlation. This is not a cause and effect, they are both benefiting from the same market conditions.

As you can see in the chart below, the dollar rose first in June 2021, followed a month later by bitcoin. Then again in September 2021, followed a month later by bitcoin. Most recently, the dollar began surging in the first days of November, if bitcoin is to follow in the correlation, it should begin to rally again right at the beginning of December.

It was during the peak of EDC1 that bitcoin first established itself and rallied in the bitcoin bubble of 2011 to $30. Could we see a repeat 30x rally this time? Probably not that much, but a massive rally is in the cards in the coming year.