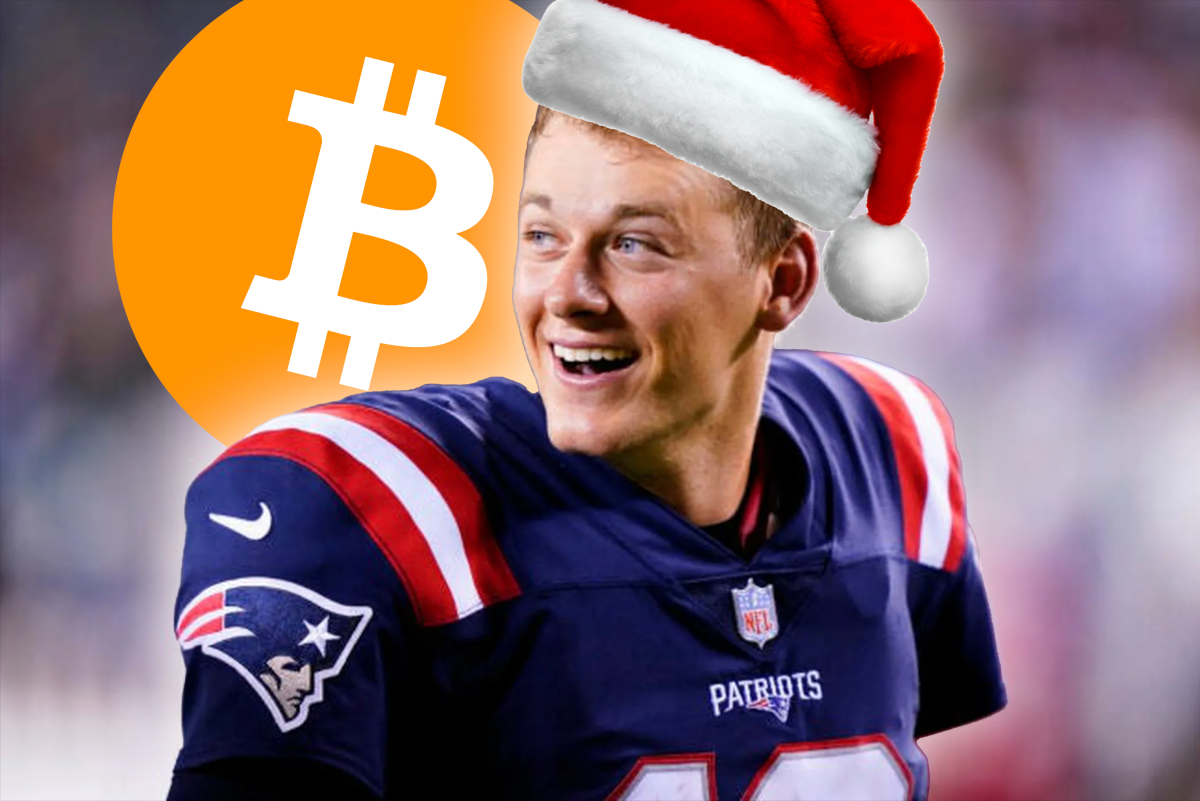 Mac Jones, the rookie quarterback sensation and best hope for the 9-5 New England Patriots to extend their decades-long dynasty in the National Football League (NFL), is gifting Bitcoin to his entire offensive line this Christmas.

“I’ve been studying Bitcoin for a while now. This year I just knew I had to give some Bitcoin to my teammates,” Jones said. “So I reached out to Bitcoin Magazine and asked for help on how to give Bitcoin as a gift.”

Mac Jones then reached out to fellow Alabama Alumni and CEO of Bitcoin Magazine David Bailey. In addition to Bitcoin, Jones and Bailey decided to give the financial education resource of a Bitcoin Magazine print subscription to the entire Patriots offensive line, as well as passes to the Bitcoin 2022 conference, which is set to be the largest Bitcoin event in history.

“When Mac told us he wanted to spread the Bitcoin wealth for Christmas, we jumped at the opportunity to support him. Our mission is to make Bitcoin the de facto money of humanity, which means blending it into our popular culture. Bitcoin is for everyone, but the brave, optimistic, and forward thinking people who see the future are the ones adopting Bitcoin and sharing this important message,” Bailey said.

With the news, Jones becomes the first NFL quarterback to give Bitcoin as part of a ritual that’s now tradition among elite players in America’s most watched sports league. Quarterbacks often go the extra mile to give back to their teammates, as a happy and dedicated offensive line is what protects them from an onslaught of attacking tacklers.

In 2020, NFL quarterbacks gave a range of unique gifts to their teammates from Pacman arcade games to custom paintings.

However, with his choice of gift, purchased via Swan Private, the concierge division of popular Bitcoin buying service Swan, Jones is showing the foresight to help protect the finances of his offensive line long term.

“He did an outstanding job. We got a big haul over here,” veteran center/guard Ted Karras told reporters Friday in a video press conference.

“One of the best efforts, especially by a rookie, to show appreciation and wish us a Merry Christmas,” Karras said. “So, very thankful to him and very glad to be his teammate here in this Christmas season.”

All will now hold Bitcoin for the first time, joining the 46 million Americans who own Bitcoin or some form of cryptocurrency, according to Pew Research Center.

It may prove good timing as despite Bitcoin’s recent Q4 cool-off, Bitcoin is still up 107% on the year (compared to just 27% for the broader S&P). Not to mention that over the last decade those gains are even more staggering, with Bitcoin up over 1,100,000% over that span.

Jones and his offensive line will receive the Bitcoin via the Swan Black Card, a new offering that allows users to claim Bitcoin directly with the assistance of a concierge service. Notably, Jones and Swan have both had stellar Novembers, with the former having been named the NFL’s rookie of the month and the latter raising $6 million in a Series A funding round.

Cory Klippsten, CEO of Swan Bitcoin, commented: “Our mission at Swan is to create 10 million new Bitcoiners, not just people who own Bitcoin, but people who understand how important it is. That’s why we’re so focused on education and world class service. Our Swan Private concierge team is very excited to partner with Mac and his squad on their Bitcoin journey.”

In embracing the promise of Bitcoin, Jones follows a lineage of football greats who have begun to hold Bitcoin or take their salaries in the cryptocurrency, including Odell Beckham Jr., Saquon Barkley, Aaron Rodgers and reigning Super Bowl MVP Tom Brady, in whose footsteps Jones follows in New England.

Bitcoin and crypto exchanges FTX and Crypto.com have both purchased ads for Super Bowl LVI 2022, which means this February could see Bitcoin gaining broader visibility on the national stage.

Time will tell whether Jones and his upstart Patriots will be on the field for the game. In anycase, they will be attending the Bitcoin 2022 conference in Miami this April as special guests.

Lonely As A Bitcoin Mining Investor