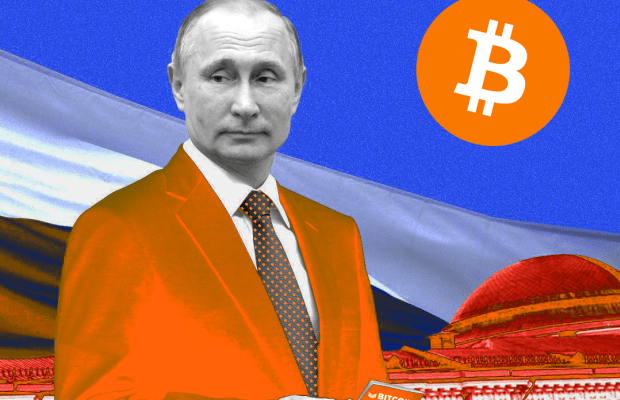 Russian President Vladimir Putin made new comments suggesting a growing tolerance for Bitcoin and cryptocurrencies during an interview with CNBC that was posted on the Kremlin’s website Thursday, Bloomberg reports.

“I believe that it has value,” Putin told CNBC’s Hadley Gamble at the Russian Energy Week event in Moscow Wednesday. “But I don’t believe it can be used in the oil trade.”

The questions arose out of concern for how Russia would exit dollar-denominated oil contracts due to U.S. economic sanctions.

Putin stated that while Bitcoin and crypto may exist as a means of payment, it is still “too early” to talk about settling crude contracts in Bitcoin or crypto rather than in dollars.

The Russian president also expressed concerns about the energy consumption required to maintain the Bitcoin network, however, he conveyed a clear intention to move Russia away from U.S. dollar reliance.

“I believe the U.S. makes a huge mistake in using the dollar as a sanction instrument,” he said. “We are forced. We have no other choice but to move to transactions in other currencies.” In June, Russia announced it would drop U.S. dollar assets from its sovereign wealth fund.

“In this regard, we can say the United States bites the hand that feeds it,” Putin added. “This dollar is a competitive advantage. It is a universal reserve currency, and the U.S. today uses it to pursue political goals, and they harm their strategic and economic interests as a result.”

While it is still too early to say whether Russia is considering Bitcoin as a store of wealth to replace the dollar, it is clear officials understand the dollar is not viable as a reserve currency in the long term and that Bitcoin may pose a potential neutral alternative.

This comes nearly one month after Dmitry Peskov, the acting press secretary for Russian President Vladimir Putin, said that Russia has no reason to recognize Bitcoin.

Many Bitcoiners are eager to see which country will adopt Bitcoin next in any official state capacity. While Russia may not be a near-term contender for Bitcoin adoption, its government is talking about it because it’s on the table.

Discussing Bitcoin FOMO: “Take The Time You Can”

Elon Musk’s Tesla Up Over $1 Billion On Bitcoin Investment