The Fight For Bitcoin, The Keys To Victory 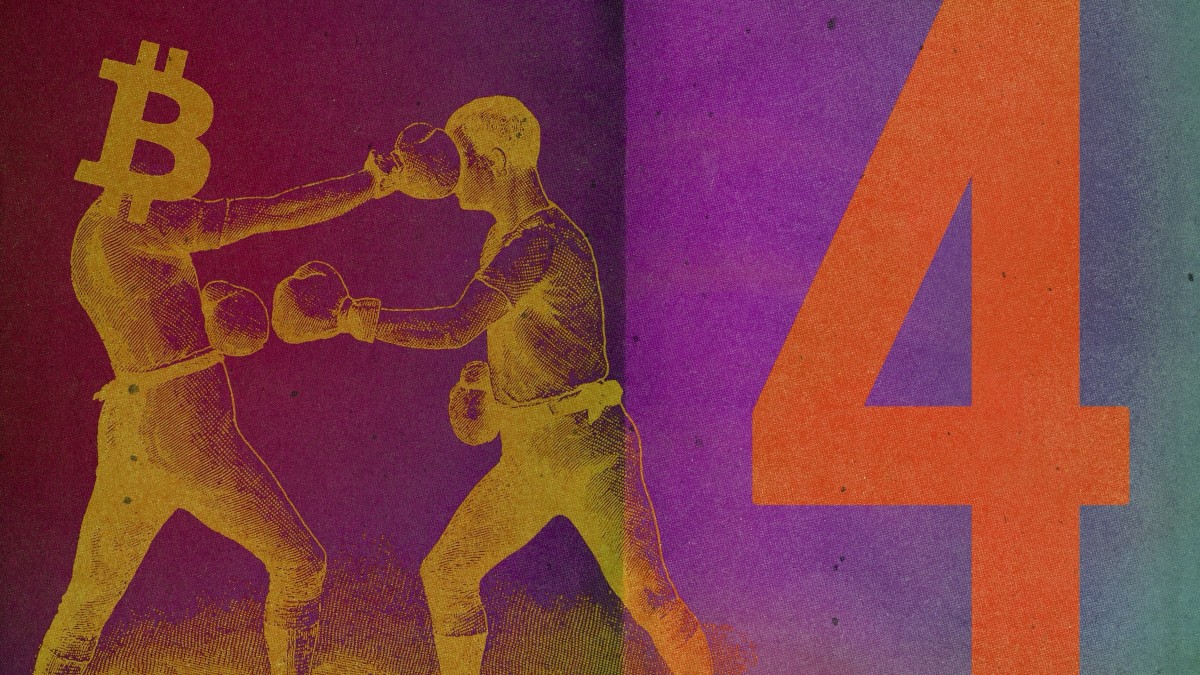 The Fight For Bitcoin: Round Four

“Nothing is built on stone; all is built on sand, but we must build as if the sand were stone.” – Jorge Luis Borges

There is no such thing as digital scarcity. Information always yearns to be free, and with the advent of the transistor, and later the microprocessor, the compression of the universe’s infinite states has never been more possible. Music, video, jpegs, an Excel sheet, and even this article itself are all being converted into a serpentine chain of ones and zeros, flung across the globe in packets of lights, only to be captured and stored in stasis in the magnets of our laptops and smart phones.

The Bitcoin network, while a rapid departure in implication, is still bound by the laws of thermodynamics and the binary basics of analog computers found in the many switch transistors that make up a microchip. Bitcoiners love to mock the NFT speculators by making reference to this computer science factoid by making many a meme of “right-clicking” and saving the image reference file these digital signatures point to on the smattering of centralized databases utilized in the wash trading schemes of today’s digital frontier of artistic commodification.

But while these dunks are very often warranted, they are often accompanied with a grand misallocation of definition to what their own private keys are accomplishing on the Bitcoin network. There simply is no digital scarcity, just an applied probabilistic utilization of proper private key management. There is nothing special about the massively vast, entropically-derived number that designates your keys that cannot also be right clicked and copied ad infinitum. In fact, it is very often a terrible idea to artificially reduce your seed phrase to only one safe place, in case of human error or an act of God removing yourself from access to your private key. There is also nothing unique about your private key that makes it “private” or “scarce” outside of the probabilistic application of cryptography to astronomically large data sets making the chances of some bad faith actor stumbling upon your private key astronomically unlikely, but not impossible. Would it take the computation power beyond the scope of processors known today attached to power sources the size of our galaxy’s sun before a single key was brute forced? Seemingly. Would it make more sense economically to apply this energy in good faith towards securing the network? Seemingly. Would the obvious economic focus be towards a single Satoshi-era wallet, effectively acting as a bug bounty for the security of the entire network? Most likely. Does cryptography move exponentially away from said liner brute force, and with an agreed-upon snapshot of the network, could a change in hashing algorithm reapply this probabilistic application of security and scarcity to the Bitcoin ecosystem? Theoretically, and hopefully, although if these hashing algorithms are significantly broken, the last thing anyone will be worried about is Bitcoin when all nuclear codes, military communications and legacy banking systems are suddenly available and corruptible.

So why is this important to understand? Without proper utilization, self-custody and reasonable privacy practice with your private keys and corresponding UTXO set, Bitcoin is just a public, clunky and slow database; an MMORPG sequel to Windows Excel. You might have heard Bitcoin being described as a triple-entry accounting system, and all that means is that alongside the typical input (credit) and output (debit) columns, there is a third entry for signatures, or receipts for corresponding witness data to ensure claim on these specific expressions of volatility between two specific parties. This on its own is no technological achievement, and it is only when paired with the two other implications of the Nakamoto Consensus that the social constructs of the Bitcoin protocol begin to take form.

For starters, even if we agree digital scarcity is a misnomer, the application of such is pointless without the ability to prevent a double-spend. A double-spend is a financial issue that only comes to be in non-bearer asset applications; if Alice hands Bob a dollar bill, Alice can not then go and hand that same dollar bill to Charlie. But in the digital realm, when all data can be reduced to a string of bytes, Alice can email a picture of a dollar bill to Bob, then go ahead and email that very same image to Charlie, and Donald, and Edgar, with no future implication of running out of that image reference file. The theoretical hard cap on Bitcoin’s supply issuance, an asymptotic approach of just under 21 million, is rendered useless without preventing Alice’s ability to double-spend her satoshis by sending the same UTXO to Bob and then again to Charlie. This novel economic application comes from creating a distributed timestamp server with an append-only database system via proof-of-work.

Essential to the ability to snuff out the digital double-spend is utilization of a decentralized transactional ordering system that places Alice’s initial transaction to Bob before her attempted secondary fraudulent transaction to Charlie on this triple-entry ledger, immutably and chronologically secured by the amend-only qualifier of the Bitcoin blockchain without use of a centralized clock nor trusted third party. This ability to communicate immutable truth through public, peer-to-peer channels is often misrepresented as a solution to the computer science adage known as the Byzantine Generals’ Problem. In actuality, much like the misnomer of digital scarcity, Nakamoto Consensus is not a true solution to the problem, but rather another probabilistic application that serves as a usable work-around in lieu of a guaranteed execution; a coordinated mining effort to reorganize a Bitcoin transaction is not impossible, albeit as each consequential nonce is hashed into the next block header, the statistical likelihood and corresponding financial incentive to do such plummets to near impossible-but-still-possible unwanted outcomes.

So a Bitcoin transaction can be reduced to an input, an output, and a signature in this aforementioned triple-entry structure, but in reality multiple inputs from multiple UTXOs can make up an input entry, and in fact nearly always are multiple outputs utilized in the form of payment receiver address, miner fee for writing the transaction into the block, and a change output address for the remainder of satoshis from your UTXOs back into control of your private key. You can think of a UTXO as a $100 bill, with $75 going towards the item purchased, $5 going towards sales tax (playing the role of miner fees) and $20 going back to the payer in change, but in a completely different form from the initial payment mechanism. But say you don’t have a single $100 bill in your wallet, since you got paid for two days work at $50 a day, and instead pay with those two $50 bills, playing the role of dual inputs in a Bitcoin transaction. The difference between paying with two $50s in a cash exchange is incredibly minute, and at no extra cost to the merchant, and thus has no common practical implications on the cost of a transaction. Unfortunately in Bitcoin, this is simply not the case, and with every additional input, the necessity of space in the block increases, thus making your transaction more expensive. This in a vacuum perhaps seems innocuous, but after a long period of incentivizing single inputs and thus a single UTXO per transaction to save block space and thus fees, the spender is now left with a bouquet of smaller UTXOs exacerbating the problem of attempting to avoid multiple inputs in future transactions, plus expanding the complete UTXO set of the Bitcoin network. This has vast compounding effects on the future of Bitcoin in regards to scaling via transactional throughput, especially when attempting to onboard billions of users onto second-layer solutions, as well as implications to incentivizing centralization on both hardware requirements for individuals validating the state of the blockchain as well as mining pools being able to practically dole out rewards to individuals securing the chain without using custodial or third-party solutions potentially rendering the decentralized nature of the pool moot. Any further attempt to increase block size will result in an exponential expansion of the UTXO set rendering the privilege of validating consensus to a select few, while simply ignoring the throughput constraints of the current protocol will limit the practical usage of the Bitcoin chain to a select few, both of which renders the practical, decentralized application of digital scarcity, well, practically useless.

Does this mean Bitcoin is doomed to failure? Are we not only handing the transactional history of the Bitcoin network to the powers that be on a silver platter while rendering future application of the network to a small set of wealthy early adopters who can afford to pay the on-chain fees in a hyperbitcoinization scenario? Of course not, and while unregulated optimism can set one up for an Icarus-like, naivety-induced failure, so too, can such negative thinking stunt a growing revolution in the crib; without optimism that Bitcoin can win, there would be no incentive to make change to even try. The key to Bitcoin’s victory is not to simply ossify and retain the status quo, but to modulate the potentials of network growth with proper utilization of second-layer solutions that encourage self-custody, privacy, and individual empowerment without compromising the revolutionary core values of the base layer to achieve a semblance of pertinent scalability. Lightning is the furthest along of these solutions, but many issues still persist. A roadblock in achieving a cash-like privacy on the Lightning Network is the necessity of a hot wallet being connected to an internet service provider at all times in order for successful use of receiving and sending payments on the network. By integrating cold wallet interoperability, whether by non-custodial and seamless atomic to submarine swaps, or further Lightning maturation like the perhaps incoming Eltoo upgrade or ANYPREVOUT compatibility purposed in bitcoin improvement proposals such as BIP-119, the issues of batching funding and closing channels could be mitigated by hiding massive amounts of users’ transactions in single-in-appearance Schnoor signatures, diminishing the block size, economic overhead and time currently necessary for onboarding the world to Bitcoin. There are even possibilities of yet-to-be-popularized non-Lightning networks that are not as reliant on constant utilization of the main chain whenever a user joined or left the network. These state or federated solutions can create cryptographically secure transfers of UTXOs between users much like the Lightning Network but without needing to ever eventually settle on the base layer, with anonymous users joining and leaving the network at whim. These types of network infrastructures would allow all the necessary scaling potentials of a global monetary network and unlock the medium of exchange properties of Bitcoin without compromising user privacy nor exposing them to the assumed scarce block space and thus expensive on-chain transactions of the future. There is a lot of work left to do to Bitcoin to ensure its success, but the path to victory will not be illuminated with blind optimism to current shortcomings, nor crippling negativity to potential applications only possible via collaboration, due process, and eventual decisive action. There is simply no digital scarcity without proper individual application to a group consensus; the only reason there is any value at all in the Bitcoin network is the sheer belief that certain economic principles of monetary policy will remain and that practical ownership of keys will unlock their usage. Bitcoin is the least worst money we have ever found, and its presumed disruptive power and eventual mass societal implication will only be successful if it remains a champion of the individual and their accompanying minority rights. Bitcoin needs to remain practically useful for anyone, or it will become practically useless for everyone.

This is a guest post by Mark Goodwin. Opinions expressed are entirely their own and do not necessarily reflect those of BTC, Inc. or Bitcoin Magazine.