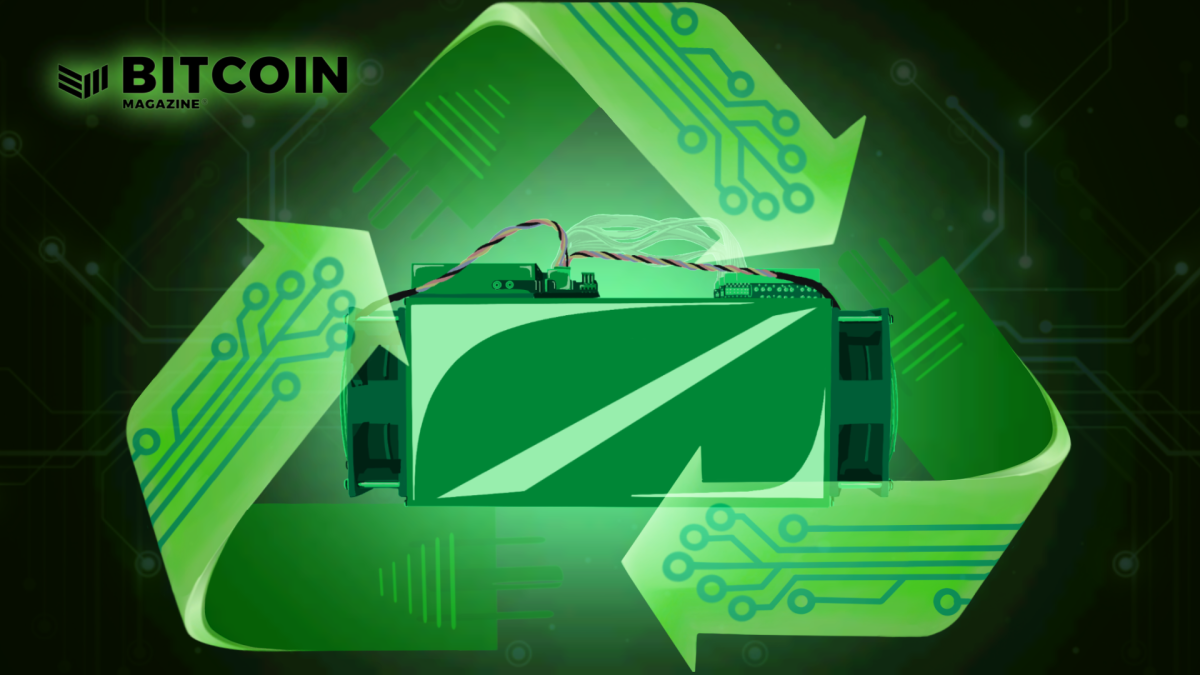 We’re all familiar with the “energy waste” and “carbon emissions” narratives around Bitcoin mining. “It wastes energy!” “It’s a carbon emitter!” Obviously, Bitcoin is a unique and terrible attack on the environment at a scale previously unheard of in human history.

But now the “Bitcoin is anti-environmental” narrative is now starting to shift towards “e-waste.” This, in the wider context of environmental narratives, is nothing new, and in the context of the consumer cycles related to electronic devices is actually a very legitimate pollution problem. Over 40 million tons of electronic waste is generated every year. But this is also a problem that predates Bitcoin, and just like energy consumption narratives, Bitcoin contributes to only a tiny fraction of the problem.

There are roughly 40 million tons of e-waste disposed of each year, Bitcoin contributes 30,000 tons of that, according to estimates cited by the BBC. That is 0.075% of all e-waste produced yearly.

Hopefully you can see that, just like the narratives encircling Bitcoin about its energy use, the contribution of Bitcoin to this larger societal problem is an insignificant rounding error. This, however, does not change the fact that e-waste is a real environmental problem.

Seventy percent of toxic waste produced by society is in the form of electronic devices. Think of how often you replace your smartphone, your television, your desktop monitors. Most people replace a smartphone every two years. Every Black Friday, people rush out to retail stores to scoop up that year’s newest television model on fire sale. This is a consumerism problem, not a Bitcoin problem.

The only real solution to this is for consumers to alter their consumption behavior. That is a wider societal discussion about not buying things you don’t need, reusing things that still work, and otherwise thinking with a lower time preference mentality. There are many dynamics that in my opinion have already guaranteed that consumers of Bitcoin miners will lead the forefront on that behavioral change.

How Do Integrated Circuits Work?

All integrated circuits in modern computing are simply packages of transistors laid out in a circuit to form logic gates. At a very high level, you can just think of a transistor as a black box that takes in a current and puts out another one based on the input and, strung together in logic gates, this allows binary data (ones and zeroes) represented by current to encode information to push through a series of logic gates that will perform a calculation on them and output a result.

The logic gates are structured in very specific physical ways to perform mathematical operations on the current (the data) flowing through them to arrive at a result. Literally every type of computation occurring on your computer is built on top of this foundation.

Each logic gate composed of transistors has a specific design dictating what kind of math it does and what specific inputs will lead to what specific outputs. You can see the example of an OR gate in the image above. Integrated circuits are just lots and lots of these gates strung together in ways that allow large chains of them to perform more complicated computation. That’s an integrated circuit in a nutshell.

The reason integrated circuits have gotten faster and faster over the years is that manufacturers are packing transistors closer and closer together to fit more of them into a single integrated circuit. This is what someone means when they speak of 16 nanometer (nm) versus 7 nm chips.

This has required completely changing the shape and physical structure of transistors to prevent this as they get packed closer together on the circuit. FinFET transistors are the current physical basis for logic gates in 14 nm, 10 nm, and 7 nm chip designs.

There’s one last thing to go through before I tie this all together and relate it to the “mining e-waste issue”: The manufacturing process used to etch these microscopic transistor designs into silicon chips is very expensive, as well as complex.

To etch transistors at the current cutting edge into silicon requires taking super tiny droplets of tin and dropping them in front of a laser, which turns the droplet of tin into a flat pancake, which is then zapped by another laser vaporizing it and creating UV light that is bounced around through multiple mirrors to pass through a mask controlling what the light will hit to etch the desired thing into the silicon (I’m totally serious). The technique is called Extreme Ultraviolet Lithograph (UEV).

With chip foundries just now beginning to deploy 5 nm production capacity with 3 nm systems in development, we’re getting to a point where the physical design of transistors is going to have to be redone in order to overcome the problem of transistors being too close together and causing errors in computation.

Some of these transistor designs will even require developing new manufacturing methods to accurately etch them at smaller scales (you can find a deep dive into the details here). That’s what it will take to reach the 3 nm or 2 nm level.

Think about how complicated current manufacturing is, the precision required to take a microscopic droplet of tin, alter its shape, and then blast it with a laser to vaporize it at the exact right time and bounce UV light around with multiple mirrors through a mask. Even that process is not good enough to yield 2 nm chips. Something even more complicated and precise is needed and that won’t be possible overnight. We might never be able to crack the 1 nm level in terms of manufacturing accuracy.

Newer, better bitcoin miners are not coming as fast as they did in the past. This is going to have demonstrable effects on the deployment viability of older mining hardware.

This is already evident with the number of Antminer S9s still operating today. The BBC article referenced above put forward a “researched” assertion that the average bitcoin miner has a lifespan of 1.29 years. S9s have been running profitably for five years at this point, having been released in 2016 (here are about 1,500 S9s waiting for deployment as of earlier this month).

There are multiple thriving market places for used bitcoin miners at this point. You can acquire them everywhere, from Bitcoin companies like Kaboom Racks, to mainstream online shops like Amazon.

Miners aren’t just getting tossed out into a landfill when a newer, more efficient machine comes out, they are being resold to be plugged in somewhere else and continue mining. Major manufacturers are now even offering education programs to teach people how to maintain and repair older equipment.

ASICs quite literally print money as long as their hash rate and your electricity price work out to a profit in relation to the current network difficulty target. There is every incentive in the world to not just throw them in the landfill and keep them running until they “fall apart,” so to say. Then, there is every incentive to repair them if the cost to do so is not exorbitant, and get them back up and running as soon as possible. Companies like Upstream Data and many others broker used, older equipment as well as new units to construct their portable mining huts.

One of the biggest behavior changes required to actually address the issue of pollution caused by e-waste is to reuse older devices when you can or when you get new ones to somehow get your older device to someone who will use it instead of throwing it away.

This behavior “change” is essentially the default behavior for miners when it comes to their equipment. So, take that into account with the dynamics of producing lower nanometer chips getting more difficult, expensive and taking longer, and ask yourself this question: Is Bitcoin an evil machine destroying the environment with no regard for it, or is Bitcoin actually solving the environmental problems that all industries have, faster than any other industry on Earth?

This is a guest post by Shinobi. Opinions expressed are entirely their own and do not necessarily reflect those of BTC Inc or Bitcoin Magazine.