Nobody Understands The Monetary System 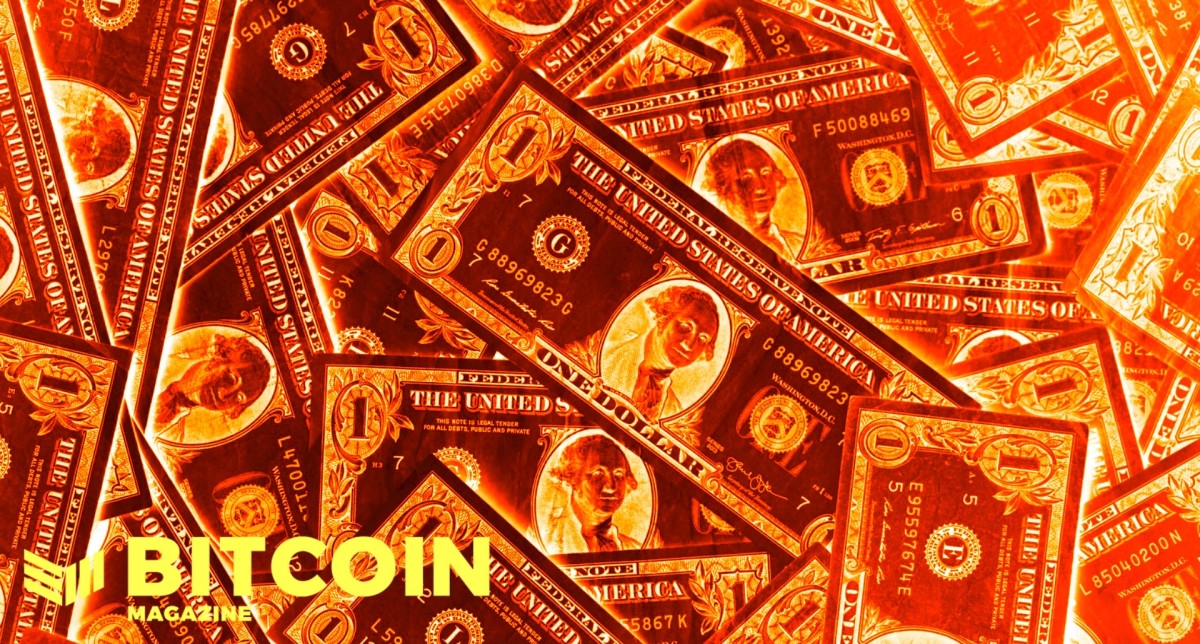 “If you want to make an apple pie from scratch, you must first invent the universe.” – Carl Sagan

Among the first objections that arise for anyone who has just learned about Bitcoin is “this is too complicated to understand.” And it’s true; private keys, block times, difficulty adjustments, UTXOs, uncensorable CoinJoin transactions, hash-something — the learning curve is steep and, for most, the reasons to ascend it seem few and far between.

The first time I was introduced to Bitcoin in practice (not in theory — techno-babbling libertarians had unsuccessfully pitched me the idea for years), the intimidatingly tech-savvy guy who did so botched the process.

First, he had me download some shady-looking app — which I didn’t have space for on my phone, and so, ironically, I first had to remove a few podcasts on monetary economics. Second, he had the app generate some random words, and in the absence of pen and paper, had me type them into my phone’s (cloud-saved!) note-taking app. Third, he tried to send me 100,000 sats, but the spotty internet on his phone kept interrupting the process.

Clearly, I wouldn’t become a convinced Bitcoiner that evening; the hardships of the process seemed altogether useless — the cure worse than the central banking disease it supposedly tried to solve.

After he had gotten his shit together, and my polite patience having run out a half-dozen times, he finally managed to send the sats — and triumphantly expressed “See, see! This transaction happened without anybody knowing! And nobody could stop it!”

Not impressed, I pulled out a $5 dollar bill, handed it to him and mockingly imitated his triumph: “See, see! That happened without anybody knowing, and nobody could stop us from doing it!”

Bearer assets are nothing new in the history of money and all he had convinced me of was that bitcoin was some complicated digital way of doing that. But if the tech-raptured can’t effortlessly do it, what hope is there for you and me? And you’re disintermediating a banking system, the purpose of which is to efficiently and securely make payments, and to make lending and borrowing possible. Nobody was trying to stop anybody’s payments — what was this guy on about?

It would be years before I would see those troubles of the current fiat payment networks.

What’s Amazing About Bitcoin Is Not That It’s Digital

On the Bitcoin 2021 stage, Alex Gladstein wanted to illustrate the simplicity of using bitcoin by sending sats in real time to Strike’s fundraising campaign for Bitcoin development. It was eerily similar to the Bitcoin zealot I described above:

Gladstein: “So I’m on the Strike page, right here, and I’m going to go ahead and donate, you know, two dollars’ worth of bitcoin, to Strike … It is going to go … and it’s gone. That’s a bearer asset that has just moved instantly around the world. And, I didn’t ask permission from anybody.”

Gladstein succeeded much better in illustrating a (Lightning) payment than the guy who first tried to send me bitcoin all those years ago. Naturally, the audience “woah”-ed and applauded, but the informed critic could equally well have responded with “Yes, and? Venmo does that too.”

In an episode for the “Bitcoin Magazine Podcast,” Mark Maraia explained his approach to “onboarding boomers” — that demographic with money, time and a healthy fear of government overreach, yet not exactly known for their advanced technological know-how. “Forget all the theory,” Maraia says, pointing to everyday items like computers or iPhones — do you honestly know how they work? “I have absolutely no clue,” he says, and adds crucially that “That’s OK!”

His quip is nice and comforting: nobody understands technology X, and that’s fine, because we see what technology X does and we can use it. Similarly, if you don’t understand Bitcoin, that’s still OK.

Except that it’s not.

Understanding what Bitcoin can do for you — its use case — requires you to understand the incumbent monetary system. Unlike a phone, a car or a computer, there is no visible value-add in using bitcoin for a middle-of-the-road Westerner who has never been sanctioned, never done anything illegal, never tried to buy goods or services that a payment processor or government disapproves of, has their salaries (and savings!) indexed to inflation, don’t understand why recessions happen and (on a government payroll at least) don’t suffer from them, or what central banks do or where money comes from.

I don’t need to understand any of the underlying tech in a phone to see how I might use it and how it could assist my life. In contrast, Bitcoin’s value-add is tied up with its “compared-to-what” alternative in the incumbent monetary system that 99% of us never think about, never cause us any payment-related troubles and we consequently pay no attention to.

Of course, most Bitcoiners know that the Visa-Wise-Apple-Pay analogy is faulty. And my guy could have made Saifedean Ammous’ argument that bitcoin has salability across space, which my $5 bill lacks. But to understand much of what sets bitcoin apart you need to go well into the monetary plumbing weeds. What happens when we make a bank payment? What is money?

International transfers or bank-issued Visa cards require identification in a way bitcoin doesn’t; they don’t provide final settlement (payments can be revoked later); bank transfers are often deferred net settlements (though real-time gross settlement payments are rolled out in more and more central bank payment networks). Funds in Venmo or PayPal or other lower layers of the dollar banking system are permissioned, in the sense that any of the half-dozen entities required for a payment to be successful could block it — for innocent technical reasons or more malign control/authoritarian reasons.

Thinking that an effortless Venmo payment is akin to an on-chain bitcoin transfer because they look and “feel” the same, is a rather elementary error to make. They’re both digital; they both involve “money,” whatever that means; they both allow for transfer of value from one place to another. But in order to understand why they are different, you — like the Carl Sagan quote above — must first explain the whole monetary system: where it can go wrong, what it relies on, how new money enters into it, what banks do, which entities have the power to block, delay, inspect or charge fees for transactions, what you’re risking by passively holding a constantly depreciating currency.

To Gladstein’s credit, he has an understanding of the banking realities of the bottom billion that dwarfs any payment troubles that most Westerners have ever encountered. But the average nocoiner doesn’t. Which is why we routinely get news articles where some clever-by-half financial journalist lumps together bitcoin with stablecoins, with non-fungible tokens (NFTs) and central bank digital currencies (CBDCs). Or when the chairman of the Federal Reserve Board says that CBDCs make the need for bitcoin or stablecoins obsolete: they’re all the same, really — new, hip, digital ways of storing and moving what seems to be valuable things.

The Fed is here to help steward the dollar system, so once its own fancy-sounding technical solution is in place, there could be no need for private options. And “programmable money” sounds amazing — at least until the programming of the not-so-kind programmer stops you from purchasing what you require.

From Gita Gopinath at the IMF, we learn that the Russia-Ukraine debacle “would also spur the adoption of digital finance, from cryptocurrencies to stablecoins and central bank digital currencies.”

What about the conflict could possibly spur anything but bitcoin? Finance is already digital. Fiat bank money is already digital. The Fed adjusts the monetary base, digitally, through purchases and sales of assets via its New York Fed branch. The dollar is already discretionary and permissioned, controlled, regulated and surveilled. What does a central bank digital currency (CBDC) bring to the table?

If anything, it would make the politicization of banking-related problems on both sides of the Donetsk battlefield worse, with even more control by authoritarians who want to mandate what people may or may not do with “their” money. You don’t need a blockchain or a token to do 99% of what cryptocurrency projects attempt to do — and the ones that appear to do something useful, don’t do that better than Bitcoin.

Beyond the first few hours and days, before international transfers could comfortably arrive to Ukraine’s banks in bulk, there was nothing that “cryptocurrencies” broadly speaking could do for Ukraine; its problem was real, not monetary. Help fleeing refugees smuggle out their savings against a hostile banking system? Sure, bitcoin always excelled at that, but how would a CBDC, issued and governed by the National Bank of Ukraine fare? Or worse, Ripple, whose CEO proudly stated:

“To clear any confusion – RippleNet (while being able to do much more than just messaging a la SWIFT) abides by international law and OFAC sanctions. Period, full stop.”

Instead of being the permissionless, uncensorable, F-U money that bitcoin aspires to, its cryptocurrency “competitors” proudly uphold censorship and government sanctions:

“RippleNet, for example, has always been – and remains today – committed to NOT working with sanctioned banks or countries that are restricted counterparties. Ripple and our customers support and enforce OFAC laws and KYC/AML.”

Complying with authoritarian sanctions is the opposite of what freedom money does.

The value-add of Bitcoin is the liberty and independence that comes with holding your own money outright — unencumbered by a bank, a payment processor, a financial regulator or a tax man. It’s no longer being subject to the whimsical demands of your authoritarian ruler, democratically-elected or not. It’s to no longer suffer the asinine consequences of the monetary excesses that the dollar’s current stewards have so catastrophically botched.

Bitcoin is freedom money for a century of liberty. But to truly grasp why that is, you need to see what’s wrong with the system it attempts to overthrow.

Understanding how the fiat monetary system works is fundamental to understanding Bitcoin.

This is a guest post by Joakim Book. Opinions expressed are entirely their own and do not necessarily reflect those of BTC Inc. or Bitcoin Magazine.