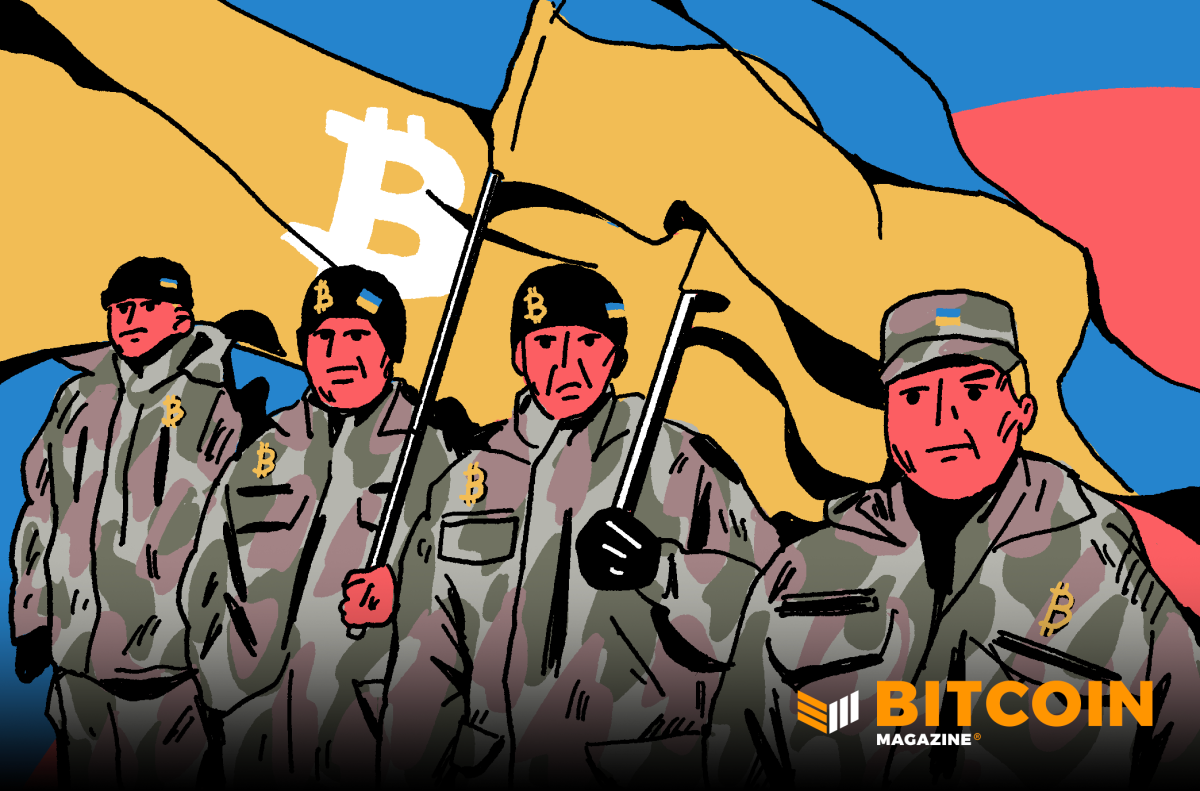 You go to sleep one day and wake up the next to find your country is under attack by a foreign power, bombs are falling from the sky in major cities targeting military and critical infrastructure and foreign troops are moving in from all directions. It’s difficult to understand the fear that someone would experience in such a situation, but that is exactly what millions of Ukrainian citizens have been feeling over the past few days.

As of February 24, the Ukrainian central bank suspended electronic cash transfers and ATMs have been overrun. The borders have been closed for all men of fighting age, who have been ordered by the government to stay and fight against Russian soldiers. The government has been encouraging citizens to make molotov cocktails to help fight to defend the country. It’s a horrifying situation, and it’s beyond words the damage that such things cause for people when they happen.

Bitcoin doesn’t fix this, it won’t end or undo this situation. But what it can do is function as a tool to help people maintain control over their wealth to survive such a situation.

Protecting Wealth In Times Of War

I was able to speak with a Ukrainian who was able to get across the border to Poland (and am very grateful for his time in speaking to me and others, given the gravity of the situation he finds himself in) who was able to use Bitcoin for exactly this purpose.

For obvious reasons of privacy, during the interview he used the pseudonym “LDV.” He is the webmaster for the company Helios Fund. They take investors’ funds and invest in bitcoin and altcoin mining operations, timing altcoin sales for bitcoin at optimal market points so the profits can maintain the operation and be distributed to investors. Helios has paid LDV in bitcoin since he began working for them around a year ago, something that quite literally made the difference between him being able to get out of the country with enough money to survive while he figures out what he is going to do in the long term.

LDV went to the bank before attempting to cross the border to withdraw money — the problem was, he was not allowed to do so. Banks all across the country had shut down ATMs and were not allowing cash withdrawals. This obviously presents a major problem when you are trying to go to a foreign country to escape a military invasion. How will you pay for food, rent or necessities to live your life?

In his case, LDV was able to take some of the bitcoin he had been saving from his salary and sell it to people he knew for cash to acquire around $600 worth of Polish złoty to be able to get by after crossing the border into Poland. Bitcoin was literally the difference between being able to get out of Ukraine with enough money to get by in the immediate term, versus getting out with nothing, condemning himself to a state of total destitution. To paraphrase his own words during my time talking to him, “Without Bitcoin, I probably would not be here talking to you right.”

Bitcoin illuminates a very stark dividing line in drastic situations like what is going on in Ukraine right now: the interests of individual people versus the interest of the collective (i.e., the government over its citizens). Obviously, the reason for refusing to process bank transactions is entirely focused on the continuity of government. It’s not concerned with what is in the best interest of individual citizens, but what is in the best interest of the government itself being able to continue functioning and financing its operations and defensive efforts against Russian incursion.

Bitcoin is a way to opt out of that choice being made on your behalf. It’s a way to make what you economically participate in completely voluntary. It might sound cold, or callous, but it’s the reality. In a situation like what is going on in Ukraine, having your wealth in bitcoin makes it entirely your choice whether to take your money and leave — to prioritize your own safety and your family’s over the “collective good” of your country or government — or to devote those resources to defending your country and community as the government determines. (The above is not meant to reflect the opinion of LDV or how he is choosing to use his funds, but only to outline the potential bitcoin offers in such a crisis.)

LDV and his girlfriend packed their laptops, devices and everything required to continue working remotely in order to maintain an income, got in their car and drove to the border with Poland. They made it across the border two hours before it was closed for all males over fighting age (any delay that might have occurred had LDV not had bitcoin, and had he stayed longer trying to find any way to extract fiat from his bank account, could have meant that they would have never made it out).

How did LDV get across the border with his bitcoin? With a USB drive and a piece of paper.

He had been storing his funds with a Tails OS setup on a USB drive, and a word seed recorded on a piece of paper. Is this a secure practice for large amounts of money? No. Is this something that your average Bitcoin user should be doing without taking the time to learn how Bitcoin works, or what they should and should not do with key material? No. But it allowed LDV to cross an international border during a foreign invasion of his country and to get across that border with his wealth intact.

Thanks to Bitcoin, LDV has a buffer budget of cash that was acquired by informally selling bitcoin to carry him through the immediate future of the next week or so. Thanks to the network of Bitcoin ATMs that exists in the world, he has an option to cash out more. Even if those ATMs come with onerous KYC requirements that he can’t meet, thanks to the growing prevalence of Bitcoin and the communities of people using it, he has the potential option of finding and networking with those people to directly sell that bitcoin in person for cash in hand. Thanks to Bitcoin, he actually still has some measure of wealth that he is able to use and support himself with, even as a refugee from a war-torn country, instead of being entirely dependent on the charity of the Polish population.

With Bitcoin, LDV was able to flee to a foreign country with the wealth that he was able to save from his job, with multiple options to be able to convert that to the local currency if necessary, as opposed to fleeing with nothing but the clothes on his back and counting entirely on the charity of the people around him when he arrived. That is the power that Bitcoin offers, that is its utility value in a situation where the world around you is literally falling apart.

Safe For Now And Fighting Back

LDV is currently situated somewhere that he can count on stable housing for at least the next week or two, he has the fiat currency necessary to feed himself and meet his basic needs and he has savings in bitcoin that he can cash out into fiat when necessary to handle additional day-to-day expenses. He also has a job that will still provide income, because Bitcoin exists to function as a means of payment that is not disrupted due to the chaos currently erupting in his home country, which will allow him to deal with whatever the future throws at him in these turbulent times without having to entirely depend on the charity of strangers. None of this would be possible without Bitcoin.

Because of this ability to bring his money across the border with him, he is currently assisting a group of hackers that he identifies as “Dmytro,” which he claims is responsible for the takedowns of Russia Today and, previously, the Russian defense ministry website. According to LDV, Russian media has claimed that Ukraine attempted to invade Russia. Russian media sites have been targeted by Dmytro in order to prevent the spread of propaganda and false information.

When asked if other, more critical digital infrastructure was under consideration for similar attacks, LDV said that the focus would remain on news and media sites propagating inaccurate information about the current invasion of Ukraine. This might not seem like impactful action, but given the protests occuring in Russia over the invasion despite warnings and harsh consequences for participating in them, and the overall context of the enormous polarization of perception driven by the media in the last few years, it might be more impactful than you might think initially.

All of this is possible because of Bitcoin. LDV was able to get out of Ukraine with his savings, with a regular income that did not disappear because his bank account in Ukraine stopped working, with some degree of autonomy and the ability to pay his own way in a foreign country after having to flee his own with nothing but what he could carry, instead of relying entirely on the charity of strangers with no other option. Bitcoin enabled that. He was able to cross the border between Ukraine and Poland with a USB drive and a piece of paper and with that, transport his wealth and savings along with the clothes on his back.

This is a guest post by Shinobi. Opinions expressed are entirely their own and do not necessarily reflect those of BTC Inc or Bitcoin Magazine.

Bitcoin Is The Answer For Scotland